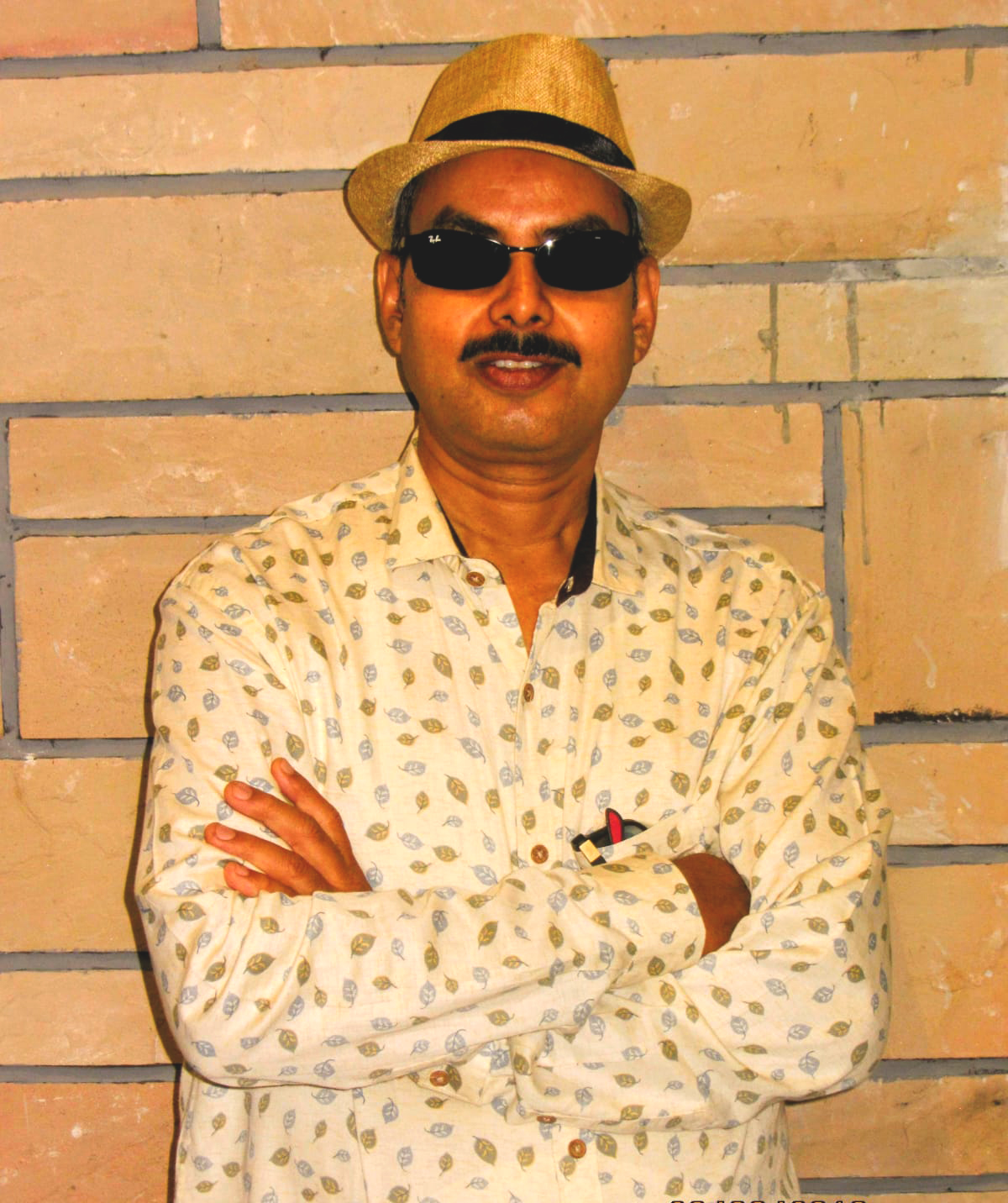 His journey in music started in 1978 when he was 12yrs old. One day he saw his friend’s elder brother singing film song & playing rhythm on wooden table with his hands. He got inspired by this incident & he also started singing film songs & giving rhythm on wooden table, desk & also on other household items like bras, copper & other utencils. Later on he started playing mouth organ, flute banjo etc. He was so passionate about learning music that he was learning all these instruments on his own & there was no guidance from anybody.

Few years passed & he passed his 12th in 1983. Because of his passion in music he told his father that he wanted to go to Bombay film industry & wanted to become Playback Singer & Music Director but father suggested him that he should find some job & help him financially & there will be no scope as a playback singer or Music director for him in film industry.

Working in Pvt ltd & ltd cos

Working in Pvt ltd & ltd cos- So his life took turn he started working. In the year 1983 when he was having only 12th commerce certificate & little background of accountancy he joined one CA as Assistant for few months & then as a sales representative for an agency dealing with Cadbury Products. In 1986 he joined Pvt ltd co. Worked for 5yrs & after that till 1995 he worked for 3 more ltd & Pvt ltd cos and worked in store, purchase & despatch section.

His main passion was music composing so he devoted lot of time in composing hindi, marathi & English songs. IN THE YEAR 1997 he got an opportunity in Bihar as a Music director/Music teacher for a jain organisation. His main work was to compose Navkar Mantra & other jain mantras , stotras & bhajans by jain spiritual masters and to teach them to jain munis & other singers for an album . He sucessfully finished the album work. Since his main passion was in music composing he devoted his lot of time in composing music in many genre. Many albums & single are not distributed yet but very few single & albums are available on more than 20 music streaming platforms like Spotify, iTunes , Apple Music, Jio savan , Amazon music etc.

As a music student

As he was very very passionate about music since his childhood days & sense of music & sense of rhythm came to him naturally as natural talent, he started devoting his time in practicing different musical instruments like Guitar, Keyboard, Harmonium, Tabla, dholak, Congo ,bongo & other musical instruments gradually. , Later on after few years he took training of these instruments with different masters & spent lot of time in that. He also took training of classical vocal for many years to develop his own style of singing & to gain proper knowledge in music.

As participant in various Singing competition 1983 to 1995 He participated in different Singing competition and won various prizes medals & certificates. As a Singer During this time he joined one orchestra group as a singer and started doing live performances with that group. He used to imitate the voice of various legends like Mukesh, Manna day, Yesudas, Talat mehmood, Hemant kumar, Mohamed Rafi ,Shailendra Sing, Bhupendra , Suresh Wadkar, Udit Narayan, Bappi lahiri, R D Burman, Abhijeet Bhattacharya, Vinod Rathod , etc. He was very very successful as a singer & his voice got tremendous appreciation by the audiance.

Later on he started his own orchestra groups named Orchestra Golden Melodies & Sur Soneri Soneri and did live shows all over the Maharashtra with a group of 10 artists.

Work as trainer for upcoming singers/musicians

While he was working for Pvt ltd and ltd cos his Riyaz & orchestra shows were also going on. While doing shows, he started giving opportunity to upcoming singers & musicians in his orchestra. While teaching them different singing & playing techniques he realised that he can guide upcoming singers & musicians very well & he developed confidence about teaching music to others. Then he started his own music school & started giving training to common people also.

In the year 2000 he got the opportunity in Air Force school Vimannagar as a Music Teacher and started giving training to students from 1st to 12th standard . He used various tactics while teaching music & He was extremely popular among his students & other teachers as everybody liked his singing, acting , music composing & other skills. He selected & trained students for School band to perform while school programmes & to participate in different inter school competition. He Composed many Patriotic & other songs for his school for various occassion. While teaching , he observed that many things are missing in the present education system like

All these experiences motivated him to think upon these problems & to find out some solution about what should be essential steps in learning & how to develop the proper teaching method.

As founder of Music institute

As he developed confidence because of his earlier experience as trainer to upcoming singers & musicians and later on as a music teacher in Air Force school he started his school at wagholi. Later on this is shifted to Chandannagar and in the year 2000 he shifted his music school to Vimannagar. Gradually his school become very very popular & he opened 2 more branches. One at Koregaon park & another at kharadi. Thus thousands of students from different profession as mentioned initially took advantage of his training & most of them also enjoyed his training very much.

Work as Director of SAREGAMMA ENTERTAINMENT

With the intention of making short films ads, jingles, animation films for the increasing demand in film & media industries & also to creat work opportunities for himself & other artists like lyricist, Music composers , Music arrangers , singers, musicians, studio owners, cinematographers, video editors, animators etc he formed a group of these artists & founded SAREGAMMA FILMS & MEDIA and produced some cover songs & given opportunities to upcoming artists in above area. Anyone looking for opportunities in above fields can contact Mr Jagganath Pore & join his whatsApp group called SAREGAMMA FILMS & MEDIA

In his childhood days he was not believing in God and astrology but after facing lot of difficulties & hurdles in his life since his childhood days , he gradually began to feel that there is some invisible divine power which has lot of control over our life. He was very very ambitious about his goals but when he realised that Divine power is directing him in certain way i.e allowing him to do particular things & not allowing him to do certain things. He then started doing lot of pooja, rituals, home hawan and mantra chanting, prayers of different God & Goddess to overcome this situation. He also started reading books on Numerology & later on started doing deep study of subjects like Astrology, Palmistry, Ramal Vidya, Tarot card etc. gain more knowledge about why particular things are happening & whether we find its root cause in astrology, Numerology & other similar things. After gaining certain knowledge in this field, He used it to give free guidance to thousands of individuals including his friends, relatives, students etc. The accuracy of his guidance was 95% & it helped thousand of individuals for selecting right career, to gain prosperity, improving relationships & other personal issues, select right life partner by kundli match making, name change service for lucky name etc. There are many successful stories of the persons who either adopted the lucky name suggested by him, done the Pooja , rituals & mantra chanting, selected the careers, selected the life partner suggested by him. He got blessings from thousands of individuals for his guidance & One of his student given him feedback that he is now a 100 crores property owner when he selected the field of land dealing & construction suggested by Jagganath Sir.

His curiosity about all this subjects increased & he started developing more & more interest in these subjects. Later on he learned Reiki & Lama Fera healing to recover himself form traumatic experience , heal certain personal issues and to improve overall health & got lot of benefit out of it. He gave reiki healing service to other individuals also . He also learned Lama Fera healing to protect himself from negative energy influences. Thus many years passed & he gained got lot of experience in above field. He realised that the divine power made him to study all these subjects. Now he is sure that the divine is doing everything but we feel that we are doing it because of our ego. When the ego vanishes we realise the truth.